I always get calls from vendors about new products on the market and I always like try new and different food items for our dinner menu. Growing up in Jersey, we enjoyed eating large amounts of steamer clams dipped in warm drawn butter. We normally ate these tender soft shell clams until we could not eat anymore. I think northerners eat more mussels and calms than the southerners. Pete, from Halperns Steak and Seafood http://www.halperns.com/home/home.asp asked me if I would be interested in some special steamer clams. I jumped on that and told him if I did not sell them all, that I would take some home and cook them for dinner for my wife and I, along with a couple of ribyes and potatoes.

Swan Island is located off the coast of Maine and is named after Colonel James Swan of Fife, Scotland. Swan Island was first charted in 1606 by Samuel de Chamberlain’s expedition and at the time was used as hunting grounds by local Indians. James Swan purchased the land in 1786 and in 1791 David Smith became the first white man to settle on the island. A state run ferry began service in 1960 and helped make Swan’s Island a popular tourism destination.

Steamer clams or as some call them soft shell clams are normally found on the beach in the sand. As you will see in the video these clams are dug up from the sand and can be very sandy on the inside.

Swan’s Island and the surrounding outer islands produce what many consider to be a superior steamer clam. The unique combination of remote off shore islands and the cool rich Gulf of Maine’s ocean water produce a slow growing and exceptional clam. The clams are placed in special racks and suspended in a state-certified wet storage facility. This facility is located between two islands and utilizes the natural tidal flow of the pristine sea water to maintain the clams optimum health and purge them of sand. The clams are removed on an order basis and shipped within hours of leaving the water providing the freshest and healthiest clam possible.

This recipe is fairly simple. Steamed in white wine, sliced garlic, chopped shallots and Thai basil.
Even though these clams were very clean I still took them and rinsed them under cold water to remove any sand.

I then sliced fresh garlic.

Pick the leaves off the stems of the Thai basil. Fresh basil may also be substituted.

Place the saute pan over high heat. Add the shallots, garlic white wine and the clams and then sprinkle the Thai basil leaves over the clams.

Cover with a lid or use another saute pan to cover the clams.

When the clams are opened about 3-5 minutes, remove the pan from the heat and add a couple of knobs of butter and swirl in. 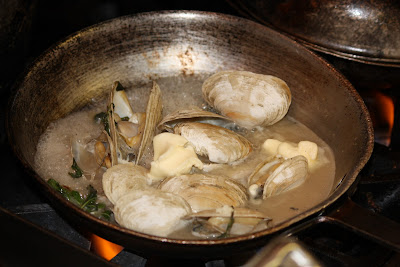 Place the clams in a bowl and top with the broth.

Serve with drawn butter for dipping.