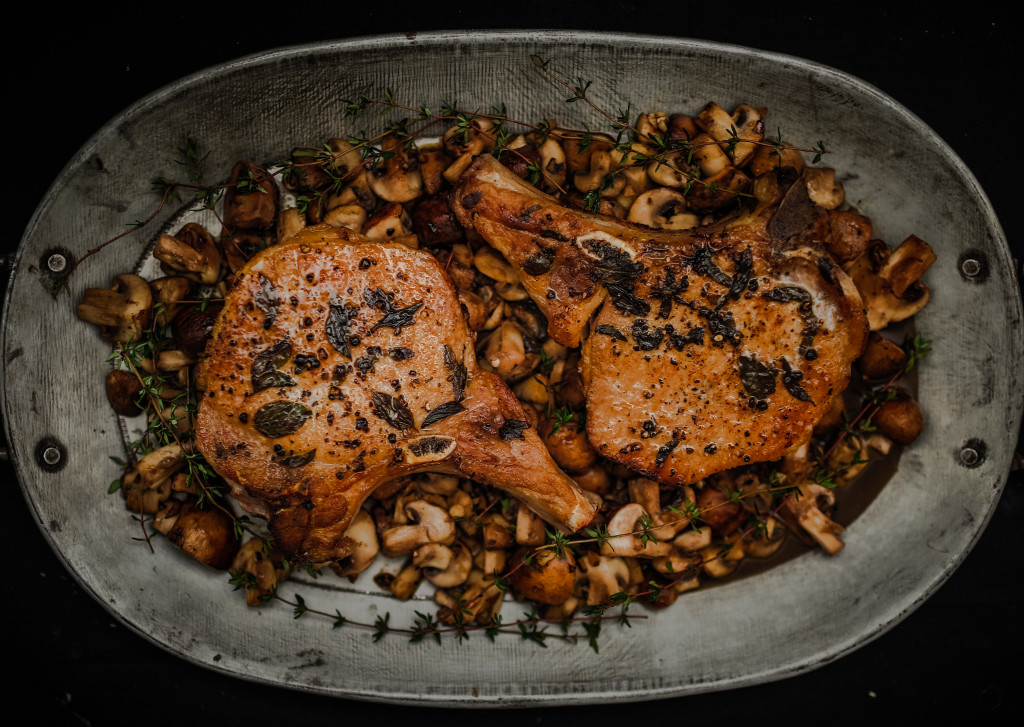 I would like to wish my family, friends, staff and guests a very Merry Christmas and a happy and healthy New Year!

Pull some leaves off half of the oregano sprigs. Drizzle the pork chops with two tablespoons of the olive oil. Season both sides with salt and freshly ground black pepper. Sprinkle the oregano over each side of the pork chop.

Preheat oven to 350 degrees. Heat a steel or cast iron skillet over medium high heat. Place two tablespoons of olive oil in the pan and then add the seasoned pork chops. Cook for a couple of minutes on one side until the pork chops start to caramelize and turn a nice golden color. Turn the pork chops over and then immediately place them in the oven. Cook for eight-ten minutes depending on the thickness or until the internal temperature reaches  160 degrees.  When the pork chops are done, remove them from the oven and place over medium high heat. Place the remaining oregano sprigs and the butter in the pan with the pork chops. With a large spoon baste the oregano and butter over the pork chops for a couple of minutes. Remove the pork chops and place on a dish to rest. Reserve the juices to pour over the dish when completed. Make the steak house mushrooms.

juice of one lemon

Heat a cast iron skillet over medium high heat. Add the olive oil, shallot and the chopped garlic and cook while stirring until lightly golden. Add the mushrooms and thyme and stir every few minutes allowing the mushrooms to brown while losing their liquid (about 5-8 minutes). The mushrooms will brown and the liquid will evaporate. Turn the heat on high,  add the butter, lemon juice, and the Lea and Perrins. Season with kosher salt and pepper.  Cook for two minutes while stirring.